What To Do About Immigration

In the last few years, the concern about immigration has heated up, and sanctuary cities are now pitted against the federal government regarding undocumented immigrants, particularly Hispanics.  Following are my thoughts on the immigration issue and what to do about it, drawn from my book The Great National Divides.

An Influx of Immigrants from Mexico 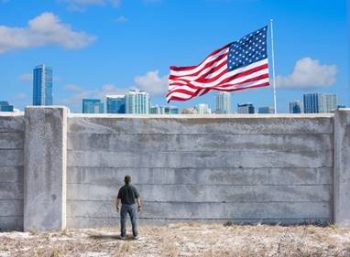 Our porous Southern border has resulted in a prolonged influx of illegal immigrants over the years such that it is now estimated that there are over 11 million illegal Hispanic immigrants in the U.S.  Many were desperately seeking sanctuary from horrific violence in Mexico and Central America, and many more were simply seeking a better life for themselves and their families in the face of very high unemployment in their countries of origin.  Many Hispanics also came to work here just to send money back to their families.  Often they take jobs that Anglos would disdain – backbreaking farm labor at very low wages, while sleeping in subpar housing, or they work in the restaurant and housekeeping industries, again at very low wages.

More problematic are day laborers in the construction industry, because these workers more directly compete with Americans for these jobs and are willing to work for less pay. As a consequence, resentment among white Americans has grown, and on several fronts.  Another gripe is that illegal immigrants take big bites out of our social services, as in healthcare and in education.  They avoid medical care because they cannot afford it.  Since they wait until they are seriously ill, they arrive in Emergency Departments requiring very expensive treatments.  Because they have more children than Anglos, their children are consuming an ever increasing share of the national education budget.  Affirmative action has also included Hispanics, another source of Anglo resentment.

But probably the biggest gripe of all is that Hispanics speak a different language and often make little attempt to assimilate.  Like most immigrants from other cultures, they are more comfortable among their own, as witnessed by the myriad of ethnic neighborhoods in our major cities.  First generation immigrants experience some difficulties adjusting to the new culture in the U.S., but for the most part they manage.  Their children, second generation immigrants, have an easier time since they are educated in U.S. schools and are often indistinguishable from U.S. citizens in terms of English ability and even accents.

However, Hispanics have been treated differently.  Bilingual education has been permitted and even encouraged in certain communities.  While this may expedite initial education of immigrant children, it results in a diversion of education funds away from the children of Anglo citizens.  And bilingual education may have slowed the progress of these children in assimilating into our culture. This is a pity, since Hispanic family values conform far better to those of American conservatives than to those of American liberals.

Anglo resentment of Hispanics has made immigration reform much more difficult, despite the agreed-upon need for so-called comprehensive immigration reform.  No one agrees what constitutes comprehensive, except that it has to include the 11 million who are undocumented.  Anglos despise the notion that illegal immigrants be granted amnesty.  Many Anglos prefer that illegal immigrants be deported or self-deport.

Trump’s Proposal to Build a Wall Between the U.S. and Mexico

Since he first began running for President, Donald Trump advocated building a truly high wall along our entire Southern border, and President Trump has signaled his intent to honor this campaign promise.  This in turn has provoked resentment among Hispanics, both in the U.S. and in Mexico.

The Wall conjures up images of the Great Wall of China, which may have successfully served to keep out foreign invaders, but now is just a tourist attraction.  In more recent times, walls have become both a physical barrier and an emotional issue.  One only has to look at other walls elsewhere to see that. The Wall dividing East and West Germany kept a defeated rogue nation divided for about 45 years and became a big emotional symbol dividing Capitalism and Communism, both for Germans and for the rest of the world.  Unlike other walls, it was designed to keep its citizens in, not to keep outsiders out.  It served its purpose but was hated.  It has been laced with graffiti and become another tourist attraction.

An even more recent example is the Wall dividing Israel and the West Bank.  That wall, when coupled with perceived Israeli land grabs and no progress toward an independent Palestinian state, has caused extreme resentment among Palestinians.  That resentment has in turn caused consequent condemnation in most of the international community. So walls can work, but they come at a cost, both financial and in terms of public relations.

Furthermore, unless adequately manned or monitored, they can be traversed by those healthy enough with ladders or ropes.  Then consider that Mexicans have become expert at building tunnels to go underneath the border.  Even Israelis have difficulty locating all the tunnels Palestinians have built along their short border.  It will be much harder to locate all the tunnels that might be built along our 1800-mile border with Mexico.

None of this takes into account that the flow of immigrants across the Southern border has diminished greatly in the last several years.  The Mexican economy has flourished, leading so many immigrants to return that there is no net influx of Hispanics into the U.S. anymore, and likely there is even a small net flow back into Mexico.  And since President Trump’s inauguration, border patrols indicate that illegal border crossings have decreased a further 40%.

Under these circumstances, is the Wall even necessary?  Is it worth the 40 billion dollars estimated that it would take to construct it?  Will Mexico ever pay for the cost of it? The Wall has also incensed Mexico and the vast majority of Hispanics, who make up 16% of the U.S. population.  Bearing in mind that this represents about 50 million people, the majority of whom are legal immigrants, this is a high price to pay.  The future price for Republicans may be even higher, when whites become a minority in the U.S. in a few decades.

Alternatives to the Wall

There are alternatives to the Wall.  Border patrol agents recommend some sort of fencing and better monitoring.  President Trump has proposed additional border patrol agents, and that may make more sense than the Wall.  All the discussion of the wall and deportation is ratcheting up fear in the Hispanic community — fear of Immigration and Customs Enforcement (ICE) agents knocking on their doors in the middle of the night and fear of mass deportations.

We will never be able to identify and deport all 11 million illegal immigrants, but we may be capable of generating enough fear in the Hispanic community that many will self-deport and return to a Mexico that is now better off than when they left it.

The political price for such a strategy will be high, but probably no higher than building the Wall. Former President George W. Bush (43) has voiced concerns about the Trump immigration stance.  On the whole, it might be much better for everyone to revisit Bush-era proposals for comprehensive immigration reform, even including possible difficult paths to citizenship.  Or what about a pathway to legal, non-voting status rather than citizenship for current illegal immigrants, perhaps coupled to some fines, restrictions on bilingual education, and an end to affirmative action for Hispanics?