The Importance Of Reducing Recividism

Reducing recidivism is a key way to both reduce crime and costs, so any strategies to reduce recidivism, even if more costly in the near term, can be much more cost effective in the long term.  It’s a subject I discuss at length in The Costly U.S. Prison System. 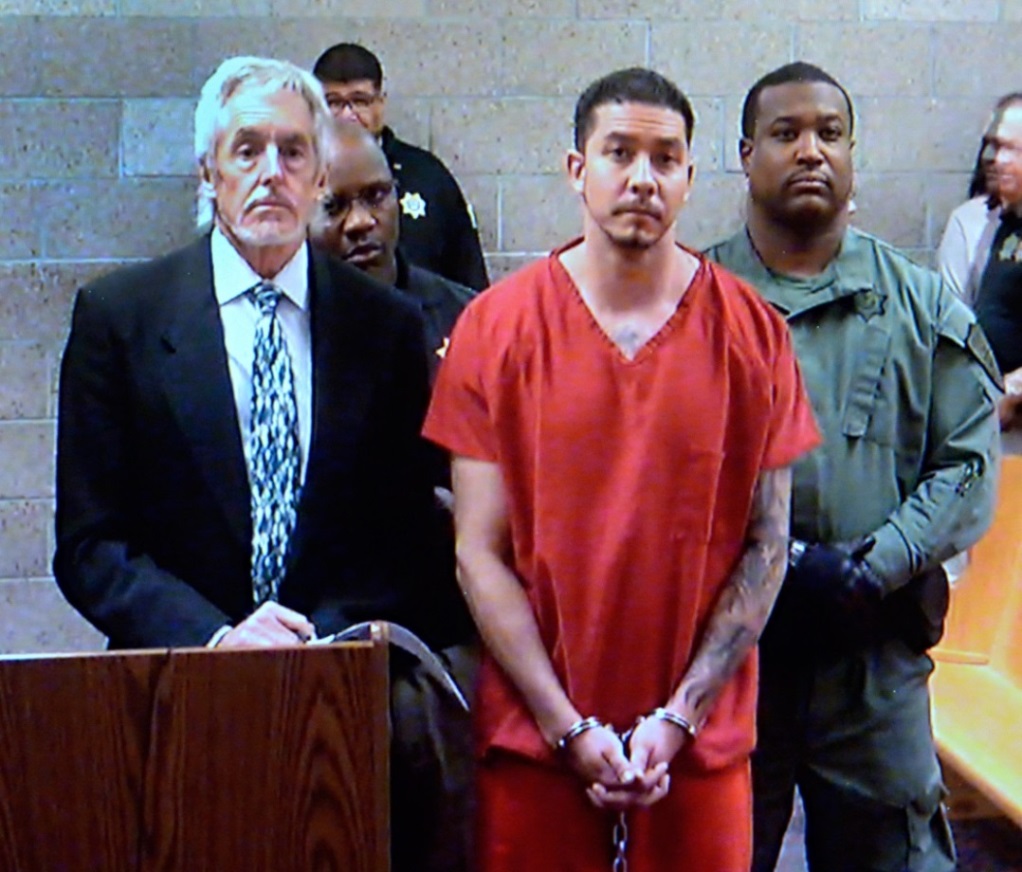 One key to achieving less recidivism is helping ex-cons adjust to life outside prison.  President George W. Bush pointed this out in his 2004 State of the Union Address, when he spoke about the difficulty that ex-cons have in adjusting to life outside of prison, resulting in a high rate of recidivism.

“This year, some 600,000 inmates will be released from prison back into society.  We know from long experience that if they can’t find work, or a home, or help, they are much more likely to commit more crimes and return to prison…. America is the land of the second chance, and when the gates of the prison open, the path ahead should lead to a better life.”

But unfortunately, the path ahead does not usually lead to this better life; instead the ex-con is confronted with difficult barriers to remaining out of prison at every turn.  A key reason for this difficulty is the kind of mental transformation that a prisoner experiences when placed in confinement, and the longer the prison term, the more the prisoner experiences this negative impact on his thinking and identity.

Doing something about recidivism now is extremely important, because recidivism in the U.S. is very high and increasing — and incarceration and associated costs cannot be reduced long term unless the recidivism rates go down.  Reducing recidivism is critical, because it is one of the keys to reducing our mass incarceration dilemma.

Almost half of those entering prison are ex-cons.  A 2007 Department of Justice report concluded that incarceration actually increases offender recidivism. Most prisoners who are released wind up arrested and back in prison, because they are ill prepared to deal with the outside world.  According to Bureau of Justice statistics, the re-arrest rate for prisoners released in 30 states in 2005 was 57% within one year, 68% within three years, and 77% for the first five years following release.

Statistics show that the first year is when the most recidivism occurs, so this is when intervention is most needed to help the ex-con have a successful re-entry.  The first year is the time when a newly released convict faces the most difficulty in adjusting to the world outside prison, which can include finding a job, reconnecting with family members, and learning about new changes in technology and society that require adjustment.

If the ex-con is able to successfully navigate these new experiences on leaving prison in this first critical year, he or she will be more likely to continue to find success in this new environment, so recidivism later on becomes less likely.  But if the ex-con is unable to find the needed assistance or land a job in that critical first year, that can set him or her on the path to reconnecting with old criminal buddies or committing crimes again to get the money to survive.

Still another reason for the high rate of recidivism that must be addressed are technical violations of parole, which account for approximately one-third of the returns to prison, as John Pfaff concluded in Locked In, based on conducting dozens of interviews with recidivists.  Many technical violations can be quite innocuous activities, such as forgetting to contact a parole or probation officer or not having access to a phone to make a check-in call.

Parole and probation officers may take a hard line on such infractions, so rather than give an ex-con a warning, fine, or another chance to stick to the rules in the future, the ex-con may simply be sent back to the slammer.  No second chance can mean being incarcerated for an even longer time due to the violation, and an even greater likelihood of recidivism when the prisoner gets out the second time around.

The Effects of Incarceration and Recidivism on Families

Were these difficulties just affecting the convicts, the situation would be bad enough, but their families are impacted, too. This problem is especially great for African-Americans, since blacks are disproportionately imprisoned in both prisons and jails. Consequently, mass incarceration has a very negative effect on black families, particularly in areas of high unemployment among black youths.  Though blacks represent only about a third of all prisoners, they are about 3 times as likely to be imprisoned compared to all prisoners.  And their rate of imprisonment is even higher when compared to whites — over 6 times as likely, and they are about 2½ times as likely as Hispanics to be imprisoned, according to the U.S. Department of Justice.

Blacks are more likely to be imprisoned than other groups because they are more likely to be involved in crimes.  But a reason for this is the difficulty of ex-cons in finding jobs.  When black youths find no jobs, they resort to selling drugs and crime to support themselves.  A study of arrests in Chicago indicated that only 25% of the individuals arrested had been employed in the previous four years prior to arrest. Moreover, given this high rate of imprisonment, the high crime and unemployment rate in the neighborhoods they return to, and the difficulty of all prisoners to successfully readjust to re-entry, it is not surprising that blacks have a high rate of recidivism upon release.

Accordingly, these costs to families, the local social structure, and society as a whole have to be taken into account in devising criminal justice system reforms. In addition to the costs of black male incarceration, welfare moms and impoverished children represent an economic drain on taxpayers, not to mention an erosion of family values. Worst of all, the family disruption that results from incarceration threatens to breed criminals from the next generation.

Thus, the current approach has hidden societal and economic costs far beyond those of police, prosecution, courts, and incarceration. Reforms are critical to stop the breeding of more criminals in our urban ghettos and to reduce costs that might otherwise go for dealing with higher priority violent crime or other worthwhile societal endeavors.

If the young black males leaving prison haven’t been adequately rehabilitated and don’t find jobs, the cycle persists. They commit crimes to survive, get arrested, and end up in jail or prison once more.

Some Reasons for High Recidivism

One big problem that prisoners face when they are released is the lack of preparedness and support they receive upon getting out to a world without the extensive structure they have grown accustomed to in prison.  This lack of preparedness and support contributes to the high recidivism rate.  While ex-cons are also subject to many confining rules and regulations ordinary citizens would find abhorrent, those rules and regulations may actually provide them some structure. If they have help in changing their behaviors and better adjusting to the world outside on release, they will be more successful in avoiding a return to prison. Therefore, it makes good economic sense to put more money into providing this support and structure for ex-cons leaving prison.

Other barriers, such as a denial of civil rights, a lack of eligibility to receive federal housing, and a requirement to reveal their ex-prison status, also make it difficult for ex-convicts to adjust to the real world. There are many such barriers to their successful re-entry back into society, increasing the odds they will fail, even though a large percentage of Americans favor a removal of these barriers.  However, currently they still face these barriers:

This requirement to reveal their ex-con status has been subjected to considerable scrutiny recently, with a view to eliminating this requirement, since it has limited the ability of ex-cons to find jobs and get reintegrated into society. While some localities have “banned the box” on job applications, for the most part, ex-cons still have to admit their former imprisonment. If they don’t, once this omission has been discovered, which is likely given that more than 80% of employers perform criminal background checks, according to a National Institute of Justice study.  Then, once employers discover this conviction and sentence, this is grounds for instant dismissal.

This negative attitudes of employers towards ex-cons, and especially blacks whom they suspect of being ex-cons, is an especially difficult barrier to overcome for the nearly half of ex-cons who are black. This unfortunate situation occurs because only about 40% of employers are likely to hire ex-offenders, according to a study by the Center for Economic Policy.  The result is a much reduced income for a high percentage of ex-cons and their families, if they have managed to reconnect with them.

Thus, employment substantially reduces the risk of recidivism.  Yet more than 60% of ex-cons remain jobless their first year after release, according to a National Institute of Justice Study.  This first year is their most vulnerable time for committing a crime or a violation of their release which will send them back to prison, since this is when they are most likely to be struggling with getting re-established in the community.

Additionally, the publicly accessible offender database also contributes to recidivism, since it makes it more difficult to successfully reenter society. That’s because a publicly accessible offender registry makes it easy for anyone checking to discover if a person seeking a job has a record.  And anyone who is using a cell-phone or has a Facebook or Twitter account can easily spread information on the ex-con’s record far and wide. This makes it much more difficult for ex-cons to be accepted back into society.

Given all of these barriers faced by ex-cons that often lead them back to prison, a good way to reduce recidivism is to simply reduce the incarceration of ex-convicts for minor technical violations of parole which could be handled by warnings and fines. The alternative of sending them back to prison has been much costlier both in terms of their upkeep, as well as preventing them from being productive citizens and making it more likely they will commit crimes.

There is a consensus among criminologists that some prisoners have already served enough time and can be released.  Therefore, these criminologists believe that technical violations of parole should not by themselves lead to re-incarceration in prisons.

As extensive research shows, if less severe sanctions were imposed for technical violations of parole, this could reduce recidivism by one-third, and that change in policy would have a major effect to reduce the number of incarcerated. 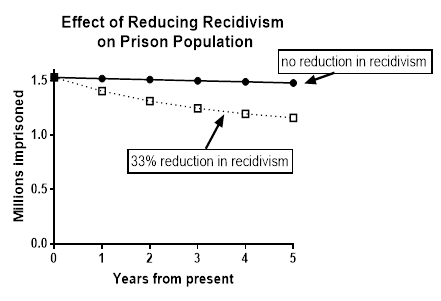 As the chart shows, there is a declining prison population for each year that a strategy of reducing recidivism by 33% is put in place. This could be accomplished solely by eliminating imprisonments for technical violations of parole. (The upper solid line labeled continues the trend of 10,000 more inmates released than entering prison.  The dotted line shows the effects of a 33% reduction in returns to prison.)

From a zero reduction when the strategy is first initiated, after five years, the millions of individuals imprisoned goes down by nearly 25%, from 1.53 million to 1.16 million. Thus, we could reduce a quarter of our current costs, if we managed to close a quarter of our prisons

Translated into money saved, that reduction in incarceration could represent $15-20 billion a year out of the costs of upkeep for those individuals unnecessarily imprisoned, plus untold billions more for the loss of their productivity and the cost to the family and community for more crimes committed by them.

So how do we reduce recidivism?  I’ll describe some major strategies in the next blog.